The BPMN language, which is based on XML, was intended for users at all levels, from the business analysts who create the initial design, to the developers who implement the technical details, and finally, to the business users responsible for managing and monitoring the processes. BPMN 2.0 has evolved to become a complete specification trying to fit the needs to all people involved in the design of a business process. But writing BPMN in XML and visualizing business processes becomes nearly impossible without the use of a graphical tool.

END_OF_DOCUMENT_TOKEN_TO_BE_REPLACED

In the following short tutorial I will explain how you can manage multiple versions of a workflow model and how Imixs-Workflow supports multiple model versions in a productive business application.

The concept of “Semantic Versioning” from Tom Preston-Werner will be the basis for the versioning method of process models. Applying the semantic versioning, the version number is separated into three digits:

The last digit is used for the Patch Level of a model. It indicates bug fixes or changes of naming or wording.

The semantic versioning can be perfectly used for the BPMN model file. This helps you to manage different version within your modellng tool:

We typically prefix the filename with the process name to maintain different workflows in the same directory.  In the example above we have an Invoicing workflow in the version 1.0.0. The model file itself should also be stored in a code repository like Git. This allows you to remove deprecated models from your code base.

Also the Imixs-Workflow Model holds a separate version number. This version number is mandatory and can be maintained in the Workflow Profile of the Imixs-BPMN modeling tool:

With the concept of “Semantic Versioning” process models can be easily handled in different versions. Even if you need to patch an already running model, you don’t need to worry about polluting the model repository of your business application if you use only 2 digits for internal model version.

END_OF_DOCUMENT_TOKEN_TO_BE_REPLACED

With the new version 1.8, Imixs-BPMN is now available for all current Eclipse platforms and also fully integrated into the latest version of Eclipse Oxygen.

Imixs-BPMN in  based on the Open Source BPMN modelling tooling for Eclipse Oxygen, which is currently available in version 1.4.3. See the Eclipse BPMN Homepage for what’s new. The current version 1.8 of Imixs-BPMN can be installed from here. 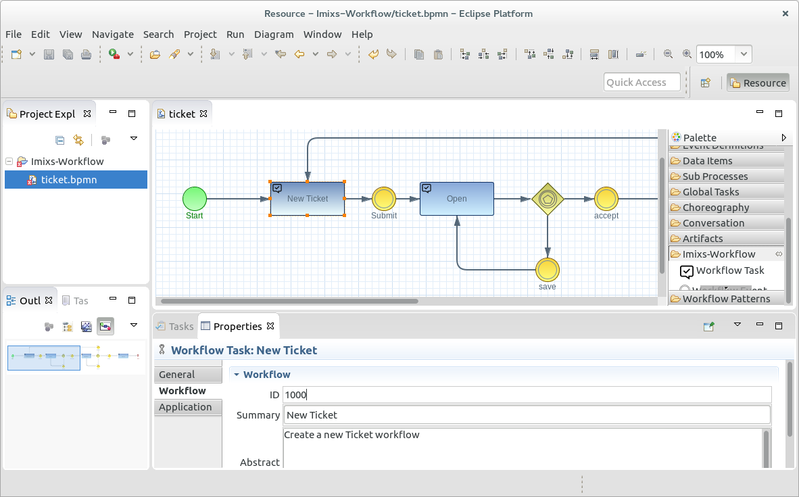 Imixs-BPMN takes the full advantage of all the capabilities from the BPMN 2.0 standard and complements them with the requirements to a modern workflow management system. Imixs-BPMN enhances the Eclipse BPMN2 modelling Framework with the aspects of a human-centric workflow model executable on the Imixs-Workflow Engine.

The Imixs-Workflow engine provides a set of modern Java Enterprise Services to create and manage process instances based on a BPMN 2.0 definition. The Imixs-Workflow engine can be embedded into a Java Enterprise application as well be deployed into a Microservice Architecture as a Docker Container. See the Imixs-Microservice Project for more details.

The open source project Imixs-BPMN has released version 1.4.7. Besides the integration into the Eclipse platform Oxygen, the new version offers various improvements in modeling business processes based on the BPMN 2.0 standard.

Imixs Workflow is a human centric workflow engine that allows to model and to execute human-2-human business processes. Based on the Eclipse platform, Imixs-BPMN offers a professional and stable platform for modeling within the BPMN 2.0 standard. Both, responsibilities and access rights, as well as individual business rules can be modelled graphically.

Version 1.4.7 now represents business rules – so called ‘ conditions ‘ – and access rights (ACL) in a graphical way. This makes it easier to create process models and control them during the design phase.

In addition, Imixs-BPMN now supports so-called ‘Conditional-Events’ and ‘Split-Events’. The former can be used to model decisions based on business rules. Split-Events support parallelism. Split-Events play an important role for the mapping of audit-safe business processes. These new features increase the transparency of complex processes within an organisation.

Imixs-BPMN is open source and part of the Imixs-Workflow technology. The IMIXS Software Solutions GmbH supports enterprises and organisations in the development and implementation of digital business processes.

With the latest version 4.2.5, the Imixs-Workflow Engine, is now supporting BPMN Data Objects. This kind of model element can be used to model more complex wokflows processing input data:

With this new feature any kind of data object – e.g. a XML or HTML templates – can be associated with a BPMN Task. As a result, the task element will provide these data objects in the new item ‘dataObject’. This item can be injected into a running process instance. See the following code example which is injecting a ‘Invoice HTML template’ into a workitem:

DataObjects are part of Imixs-Office-Workflow Version 3.2  to provide an easy and flexible way to create documents and templates during a business process. 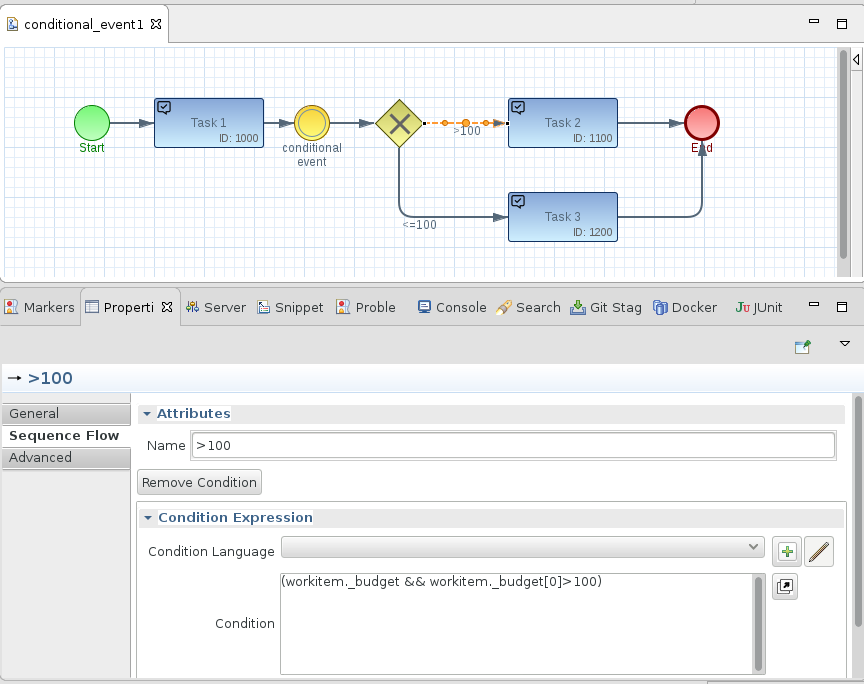 The conditions are defined as boolean rule expressions for each output of the gateway. A condition can be defined with the Script language JavaScript. The following example evaluates the workitem attribute ‘_budget’ for a value greater than 100:

With Conditional Events, Imixs-BPMN offers a significant extension of the modeling possibilities for BPMN 2.0 models to be executed within the Imixs-Workflow engine. Find further details about the modelling with Imixs-BPMN here.

Eclipse Oxygen (Version 4.7), which will be released in June of this year, includes also the next version of the BPMN2 Modeler Tool. The Eclipse BPMN2 Modeler is a graphical modeling tool for authoring business processes based on the Business Process Model and Notation (BPMN) 2.0. END_OF_DOCUMENT_TOKEN_TO_BE_REPLACED

With the latest release of Imixs-Workflow the open source workflow engine supports now Email Templates. With this new feature the email output can be based on a XSL Template. This opens up a powerful way to configure the mail content of more complex e-mail messages during the lifecycle of a business process.

The new template mode can be easily configured using the Imixs-BPMN Modeling Tool by putting a valid XSL document into the mail body definition. The template will be processed automatically with the XML representation of the current workitem.

Imixs-Workflow supports the BPMN 2.0 standard and is build up on the Java EE specification. For that reason, it is easy to connect the open source workflow engine with a mail host in various ways. Open Source Mail servers as also Microsoft Exchange are supported. Find more details about the Imixs-MailPlugin in the plugin section of the project documentation.

The new version 1.4.6 of the Imixs-BPMN Plugin is released. The new release includes bugfixes and enhancements. The Imixs-BPMN Report Plugin which is part of the Imixs-BPMN modelling tool now provides a new feature to directly include the content of a XSL file into a report definition: 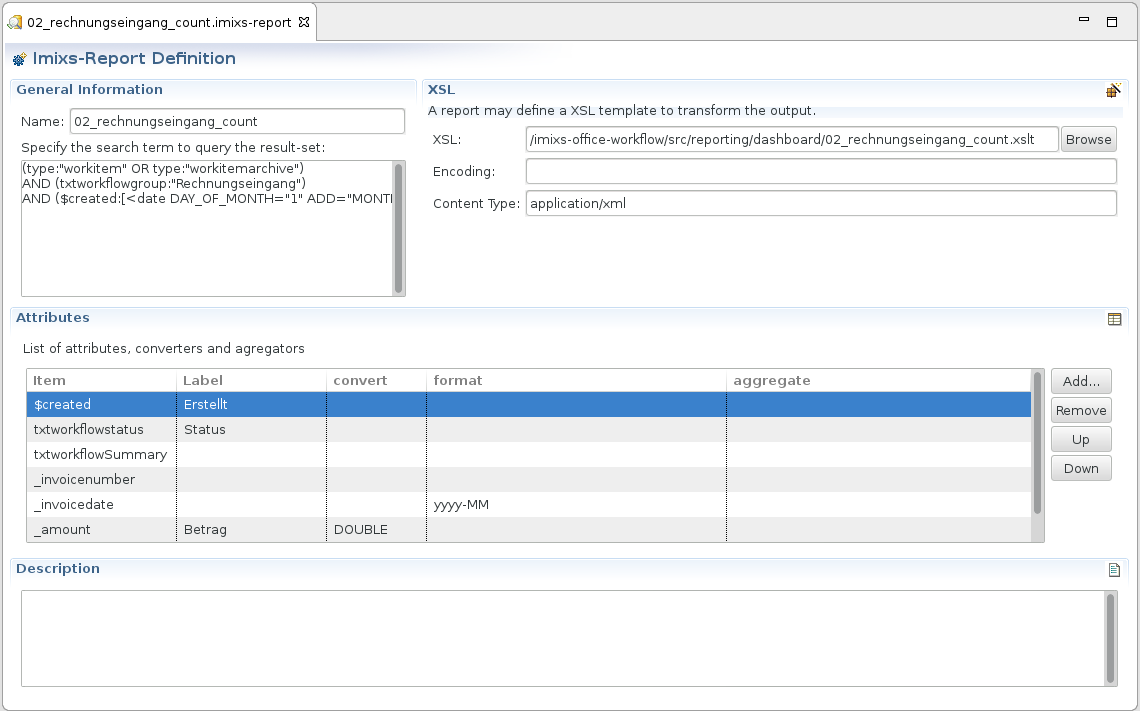 Reports allow the extraction of information from a Imixs-Workflow instance. Imixs-Workflow provides a flexible REST-API to customize the output of a report. This includes the XSL Transformation. With this feature, workflow information can be transformed in any kind of output, like XML, JSON and also different document formats like PDF or MS-Word or MS-Excel. 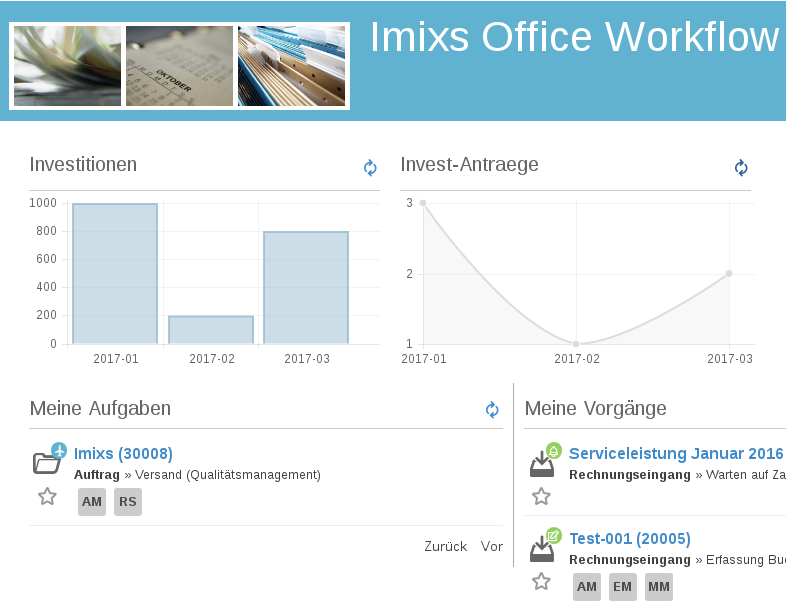 Imixs-BPMN is based on the Eclipse BPMN2 Project. The installation guide for Imixs-BPMN can be found here.