The Imixs-Workflow project provides a new tutorial explaining how a human-centric workflow can be modeled with Imixs-BPMN. Imixs-BPMN is a BPMN 2.0 modelling tool based on the Eclipse Platform. The BPMN Tool allows to design workflow models in a very flexible way. The BPMN 2.0 standard elements are extended by Imixs-BPMN providing custom task and event elements. The tutorial explains how to model typical scenarios of a human-centric workflow. Those models can be executed immediately in the Imixs-Workflow engine. See also the project ‘Imixs-Office-Workflow‘ an an example of an integrated workflow suite.

After an update of the Eclipse-BPMN Plugin or the Imixs-BPMN Plugin in some cases it can happen, that an existing process model is no longer loaded correctly into the BPMN editor. In this case it is recommanded to remove the file

which is located in the Eclipse workspace under the folder .settings/

After restarting Eclipse the BPMN Plugin is working again correctly.

The new version 1.3.0 of the BPMN modeling tool “Imixs-BPMN” is now finally released. The version supports the current Mars release of the Eclipse platform and offers several improvements and bug fixes. The allocation of write- and read-access in a running process instance has improved within the new version. ACL settings can take place now not only at the event level, but also directly in the process level. This allows to model business processes with different ACL settings much faster. The new ACL settings are supported by the Imixs-Workflow Engine since version 3.4.0. Another improvement represents the modeling of ‘versions’ within a process model. Thus new versions can be creating during a running process. Versions of a process instance can, for example be archived by the Imixs-Workflow Engine. So complex business processes become more transparent with the new modeling features.

The next upcoming Update of Imixs-BPMN includes a new functionality concerning the security API of Imixs-Workflow. With the new version it will be possible to define an ACL for a process instance on the Task level in a BPMN diagram. In earlier versions this feature was only available on the Event level. With this extension now setting the ACL for complex process models is more easy and models can be created faster. 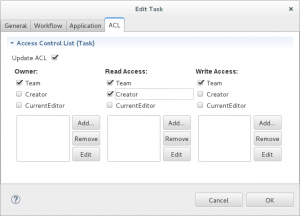 In addition the new release also includes a bug fix concerning the ImixsCatchEvent. The Imixs-BPMN Plugin can be installed from the Imixs-BPMN UpdateSite or directly from the Eclipse Marketplace.

With the latest version of Imixs-BPMN the Imixs GmbH provides now a free BPMN modeling tool for modeling workflows according to the BPMN 2.0 standard.

With Imixs-BPMN these processes can now be executed directly in a professional workflow management solution. Complex business processes and changing business models can be managed with Imixs-BPMN in a flexible and transparent way.

With the combination of Imixs-BPMN and the open source solution Imixs-Workflow, all types of workflows can be easily modeled and executed in a robust and scalable workflow management software. Also existing BPMN models can be enhanced with the capabilities of a wokflow management solution. Imixs-BPMN extends the Eclipse BPMN2 Modeling Framework which provides a powerful modelling solution based on the Eclipse platform.

The Imixs Software Solutions GmbH located in Munich has specialized in the development of professional business process management solutions and supports companies implementing their custom business processes. Due to the consistent focus on open source, Imixs-Workflow provides a clear cost advantage. No license or update costs incurred in the use of this solution. With its service concept, the Imixs GmbH offers a transparent business model which combines the advantages of a modern software platform with a professional consulting concept.

Imixs-BPMN will be open source and takes the full advantage of all the capabilities of the BPMN standard and complements them with the features of a powerful workflow engine.

Imixs Workflow is an open source project providing a powerful workflow engine to manage any kind of business process. The main objective of such a Workflow Engine is to control the states defined in the business process. The transmission from one state into another is defined by Activities. The typcial way to describe such a process flow is a state diagram. As the common standard the Business Process Modelling Notation – BPMN has been established in the last years.

BPMN provides an easy way to describe a business process from the perspective of an user or a software system. In case of a human based workflow BPMN can also be used to describe the view from one or may users participating in such a process. In the following section we will demonstrate how to use BPMN to create a model for the Imixs-Workflow.

First of all you need to remember that one of the most important tasks of a workflow engine is to control the state of a business process. This means that a process instance can always be defined by its state. So the first step using BPMN is to model the states of a business workflow.

In BPMN there are only two predefined states known. The Start Event and the End Event. They are describing the begin and the end of a business process:

Each state between the Start and the End event can be described with the BPMN Task element. A Task describes not only the state of the process but also the general task which need to be performed in a specific situation. So we can extend the model by defining additional BPMN tasks to describe our states the process can take:

This example describes the states of a simple Ticket Workflow. The different states a Ticket can have are

What we have done so far is an important step in describing a workflow model with BPMN. We defined all the tasks a business process can take and which can be identified by the workflow system to control the status of the process. Now we extend this model by adding new elements.

A business process typically defines activities which can be performed on a specific process instance. Each task depends on a state and defines a transition from one state into another. This is the workflow logic we need to design a complex business process. Using BPMN we can model this by using Gateways and Event Elements. A Gateway is used to define on ore many transistions from one state into another. A Event Element is used to describe the activity which can be performed by an actor during the workflow.  Lets see the next example:

Here we extended our simple state diagram with Gateway and Event elements to describe the activities in our ticket workflow.

If new ticket was created we defined the State ‘Open Ticket’. From this state we defined the events ‘accept’ or ‘close’ which can be triggered by the actor creating the ticket. When the event ‘accept’ is performed the state of the Ticket changes in ‘Processing Ticket’. Again we define a Gateway with now two possible transitions. When the event ‘solve’ is triggered by the actor the business process ends in the state ‘Solved’. If the event ‘reopen’ is performed we go back to the first state ‘Open Ticket’ to repeat the Workflow.

What you have seen here is a simple business process. We use the BPMN to describe the different states a process instance can have and also the Events which can be performed by an actor to process a ticket. A workflow system like the Imixs Workflow Engine can control the status of a process instance in the business model. Also the events triggered in this model can now be controlled by the workflow engine to change the states.

The Imixs Wokflow provides a rich set of functions to control a business process and define the state of a process instance. In each change of a state triggered by an activity (task) Imixs Workflow updates a lot of properties of each singe instance. For example:

These technical descriptions can be added into a workflow model and also in a BPMN model using the BPMN Version 2.0.

Read more about the Imixs Workflow technology at:

Imixs-Workflow is an open source solution for human-centric business process management. This means supporting human skills, activities and collaboration in a model driven architecture. Imixs-Workflow is based on BPMN 2.0. Find more information: